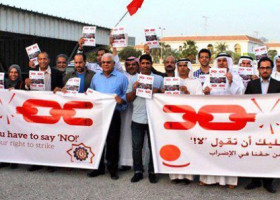 A breakthrough has been made at the International Labour Organization following two years during which employers at the International Labour Organization brought the UN body’s global supervisory system to a standstill, in an attempt to eliminate decades of ILO jurisprudence supporting the right to strike. Union and employer representatives have now reached an understanding at […]

06/01/2015 Comments Off on Cambodia: Unionists Still Subjected To Violence A Year After Strikers Killed

A year after five people were shot dead by police and 40 more were severely injured during wage protests in Phnom Penh on 3 January 2014, unionists in Cambodia are still being subjected to violence. Last month, a locally elected president from IndustriALL Global Union affiliate, the FTUWKC garment union, was brutally attacked with a […]

By LAURA CLAWSON, for Daily Kos Labor— The latest round of low-wage workers to stage a one-day strike don’t work for Walmart or McDonald’s. They work for the federal government, kind of—for federal contractors in landmark Washington, DC, buildings like Union Station and the Smithsonian museums. A recent report from the think tank Demos found […]

Breaking Down This Week’s Fast Food Strikes in St. Louis and Detroit

10/05/2013 Comments Off on Breaking Down This Week’s Fast Food Strikes in St. Louis and Detroit

AlterNet— A new movement of fast food workers demanding better wages and the right to unionize spread this week to St. Louis and Detroit, bringing the total number of such actions to four in five weeks. Similar strikes occurred last month in New York and Chicago. As during the strike in New York, we’ve put together […]

US Airways Mechanics File For Election To Become Teamsters

Mechanics and related workers filed for an election with the National Mediation Board (NMB) as part of their campaign to become Teamsters. “Because of the Teamsters’ solid, documented track record of excellent representation, the Teamsters Union is the best and most logical choice to represent us for the future as professionals in the airline industry,” Jim […]

By DAVID SCHULTZ, KHN— How many nurses does it take to run a hospital? Legislatures in at least seven states and the District of Columbia are trying to answer that question as they debate bills that would require hospitals to have a minimum number of nurses on staff at all times. So far, only one state […]

By PETER RUGH, Waging Nonviolence— Tianna Smalls had planned on working Thursday, April 4, 2013, but her colleagues convinced her otherwise. “‘You’re either with us, or you’re for Wendy’s,’” Smalls remembers her co-workers telling her. Her mother also weighed in Thursday morning as Smalls was heading to work at the franchise in downtown Brooklyn. “She said, […]

The National Federation of Nurses and the American Federation of Teachers, the largest union of professionals in the AFL-CIO, announced an affiliation agreement Thursday, Feb, 14, 2013. The agreement brings 34,000 registered nurses into teachers union, whose 1.5 million members include more than 48,000 nurses and thousands of other health care professionals. The affiliation agreement […]

A union seeking better conditions for Wal-mart workers worker won a a partial legal victory today, Jan. 31, 2013, as the National Labor Relations Board ruled to dismiss an unfair labor practice complaint  filed by against the world’s employer against the union. The case involved picketing and protests at Wal-mart stores. The NRLB agreed to dismiss an unfair labor practice filed […]